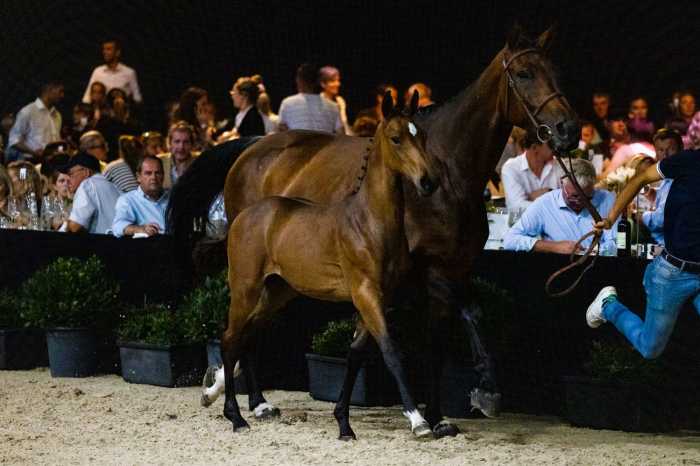 The evening started off beautifully, with a tribute to the people behind 20 years of Horseman Elite Auction and also the breeders, buyers and owners of Nector van de Bisschop were honored, in addition to our European Young Rider Champion Thibeau Spits.

The first lot of the auction, a fancy shetland foal in honor of the Center for the Prevention of Suicide was knocked off very smoothly for 3,200 euros and also the two broodmares in the collection were very enthusiastically received with 22,000 and 32,000 euros respectively.

The 27 foals could also count on many enthusiastic buyers but in the end it was Wairau BS (Kashmir van Schuttershof out of the sister of Mugano van Klapscheut) and Chalca vd Berghoeve Z (Chacco-Blue out of the damline of Explosion W) who brought in the most money with 38,000 euro. These foals are moving to Germany and France respectively.

Besides the buyers from Germany, France and Mexico, Switzerland, the United States, Sweden, Denmark and Belgium also managed to secure a few foals.

With an average of 20,086 euros per lot, this auction can therefore rightly be called a real party edition!

Although the auction has had higher and higher averages in recent years, the 20-year-old foal that was sold at the end of this year's auction was the most successful.